New policy has been released by the NSW Government to provide specific planning legislation to allow for Build to Rent housing developments within large commercial centres and in residential zones where apartment buildings are allowed.

Build to Rent (BTR) is large-scale, purpose-built rental housing that is held in single ownership and professionally managed. It provides new housing opportunities through security of tenure, shared facilities and opportunities for economic stimulus and delivery of counter-cyclical housing supply.

The new legislation to support the development of the BTR sector is a welcome step forward, bringing clarity and legitimacy to this housing market sector.

Housing diversity has long been an area of focus for the NSW Government with numerous incremental steps having been implemented to support the delivery of dwelling types that improve housing affordability and meet the needs of a diverse population. Most recently, the release of the NSW Housing Strategy discussion paper and the draft Housing Diversity SEPP have progressed this aim. New provisions for BTR have splintered from the proposed Housing Diversity SEPP and it has now been finalised as standalone legislation bringing certainty to the industry.

BTR has been progressed ahead of other components of the draft Housing Diversity SEPP due to a unique set of market forces and an absence of prescriptive policy. Largely its progress can be linked with a need to:

For developers looking to enter the BTR market, Urbis recognises three key insights which will need to be considered during the planning and operational phases on any new BTR development.

We see this this as an opportunity to incentivise development on either small or less desired B3 lands which are not suited for commercial office buildings, and thereby facilitate site renewal and support the businesses in the centres.

BTR has not been defined as a form of residential accommodation but is classified as a new tenancy arrangement, meaning it will not necessarily contribute to non-residential floor space requirements set within business zones. BTR has also been confirmed as a permissible use where residential flat buildings are already permissible (generally R3 Medium Density Residential and R4 High Density Residential zones) and business zones (B3 Commercial Core, B4 Mixed Use and B8 Metropolitan Centre zones). This paves the way for BTR as an asset class to be considered feasible in centres throughout NSW.

A minimum lease tenure has not been proposed as part of the SEPP. Initial proposals under the Housing Diversity SEPP investigated set lease tenures of three years or more. Current tax incentives do require operators to provide a range of lease terms including a genuine option to enter into a fixed term lease of at least 3 years, unless the tenant opts out.

A mix of tenure periods could present several challenges in terms of management and ongoing compliance but will result in more flexibility for both tenants and asset owners alike. There is an expectation that lease tenures will increase over time by operators as they become more familiar with the ins and outs and market demands of BTR development.

Guidelines have not been released as part of the new provisions but reference is made to the application of SEPP 65 and the Apartment Design Guideline (ADG), stating specifically that consent authorities must apply the design criteria of the ADG ‘flexibly’ for BTR development. This approach provides certainty for developers but also acknowledges that BTR should not be viewed through the same lens as a standard residential apartment development.

One such area to be considered within the assessment of a BTR development is the amenities proposed to be provided to tenants residing in the development. Research has indicated that BTR tenants are looking for high quality communal living situation, with an increased provision of shared facilities. Many are willing to sacrifice private space and private open space for these facilities which has long been the attractor of BTR developments in established overseas markets. This leads to its own set of design challenges and opportunities which have the potential to deliver innovative outcomes from a design perspective. 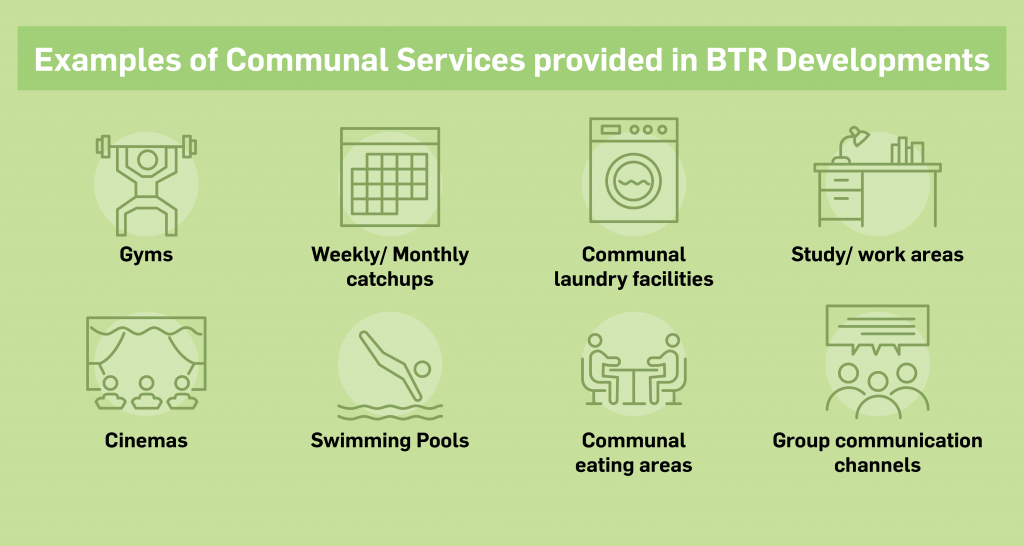 This legislation has been expedited by the NSW Government to confirm its commitment to the BTR market following recent changes to taxation conditions and an ongoing push from the development industry. The SEPP now allows developers to lodge development applications for BTR developments with certainty throughout NSW.

The NSW Government will continue to develop revised policy settings for seniors housing and new policy for student and co living housing, consistent with the drive to facilitate greater housing diversity. We expect further details of this policy development in the coming months once key stakeholder concerns have been addressed.

Our housing experts at Urbis can advise you further and help you navigate this new development framework.

Build to Rent could deliver the homes we need, and fast

Build to rent in Australia – How are we tracking?