Clusters of skyscrapers, otherwise known as Tower Clusters, are one of the City of Sydney’s proposed tools to driving employment outcomes for a Global Sydney.

The Tower Clusters are a feature of the Central Sydney Planning Strategy (CSPS), which is now on public exhibition until 10 July 2020, alongside the associated Planning Proposal (Central Sydney 2020). Given the current opportunity for industry to offer feedback, now is the time to explore whether the potential offered by the Tower Clusters is hidden in the clouds, unreachable without solving the planning puzzle.

The CSPS introduced the Tower Clusters in July 2016, to provide an indication of where potential uplift may be achievable in less environmentally constrained parts of the CBD. Clusters of skyscrapers potentially up to 330m high, nearly 24 stories taller than Sydney’s current tallest commercial building, Chifley Tower, were identified and mapped by the City of Sydney to provide an indication of where the commercial growth could be accommodated. These traverse a range of locations, including the traditional ‘core’ at the northern end of the CBD, in addition to areas such as Haymarket, Chinatown and Central Station Precincts to the south of the CBD, which are expected to grow in the medium to long term.

Since July 2016, the role and function of the Tower Clusters have been refined, and it is questionable whether the CSPS provides enough support for them to truly deliver the desired commercial outcomes for a Global Sydney.

We have been keeping an eye on the evolution of the CSPS and the Tower Clusters, with an active role on the Property Council of Australia’s Central Sydney Taskforce, discussing their mechanisms for delivery and what they mean for Sydney with senior industry representatives, including the Director of City Planning, Development & Transport at City of Sydney Council, Graham Jahn AM. This article provides insights into what we’ve learned.

What we're working with

The potential density uplift available in a Tower Cluster would be limited to a 50% FSR bonus above the current planning controls – a reasonable “stretch point” for a DA pathway, according to the City of Sydney. No additional design excellence bonus would be applied above this 50% bonus.

This is a clear shift from the previously mooted approach where applicants could explore uplift well beyond this under the Council’s ‘Draft Guideline for Site Specific Planning Proposals in Central Sydney’ if they were pursuing a Planning Proposal.

The approval pathway to achieve development uplift is consistent with the City of Sydney’s staged DA process, albeit with a mandated approach to up-front design testing, as well as refinement to the City’s Design Competition Policy for site’s located within a Tower Cluster. The minimum cost of a competition process under this scenario is likely to be in excess of $1 million due to the cost of competitors, technical advisers and jury members.

The following is an outline of the approval process required to achieve development uplift with the Tower Clusters: 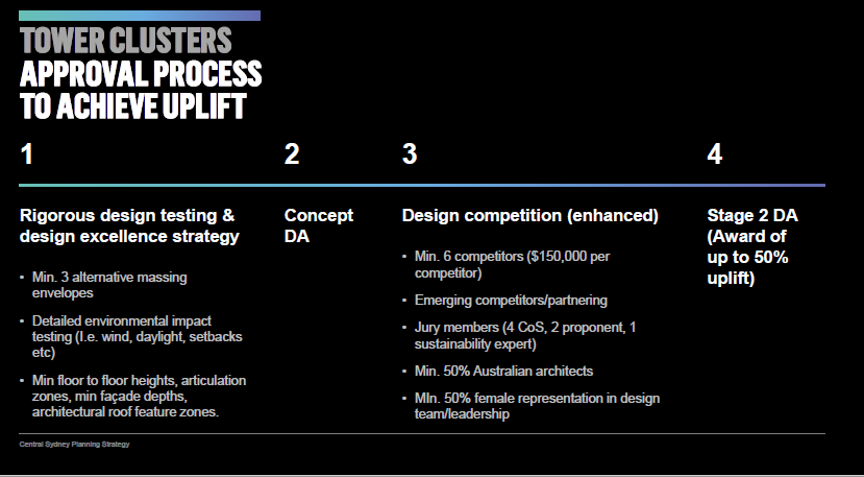 While being a ‘mapped’ Tower Cluster site is a good start, there are several practical challenges to achieve the uplift, or for redevelopment opportunities to occur, including:

There are many alternative strategies that could unlock commercial floor space and deliver the intended outcomes of the CSPS to a greater extent. These may include the following:

By taking a closer look at the northern CBD cluster, taking into account constraints of the CSPS, we determined that a limited number of sites remain that can truly deliver the CSPS’ intended employment outcomes. Some of these sites are owned by institutional fund managers, while the ownership of others is fragmented and may take longer to piece together.

Based on the Council’s preliminary capacity analysis, a number of these sites have the theoretical capacity to take much more than 50% above the base density controls (i.e. up to 27:1 FSR in some cases which is a considerable jump from 18:1). The potential misalignment in density capacity with the CSPS is likely to force applicants to explore site-specific Planning Proposals to achieve an optimised outcome.

The City of Sydney has acknowledged that site-specific Planning Proposals outside of Tower Clusters may continue to play a role in delivering the employment outcomes of the CSPS. Tower Clusters are simply one means of achieving uplift in certain parts of the CBD. We foresee many opportunities apart from Tower Clusters, that have significant increased density potential and are aligned with the City of Sydney’s aspirations.  We expect an update to the initial guidelines for Planning Proposals,  providing further direction to the industry on achieving uplift in the CBD.

We encourage the industry to take the opportunity to make your opinion count, by providing feedback on the CSPS and associated Planning Proposals, which are on public exhibition from 1 May until 10 July 2020. View all relevant documents via the City of Sydney website.

The complete endorsement pathway for the CSPS and Planning Proposal is outlined below:

Urbis has a dedicated team of experts in Central Sydney who are here to help. Contact us if you have any questions.