Melbourne 1945 is a project by Urbis GIS Senior Consultant Nathaniel Jeffrey, which shows how much the city has changed in the past 70 years. His map, showcasing Melbourne’s surburban frontier, has just been chosen to appear in the 2017 GeoHipster Calendar.

Just how much do you think Melbourne has transformed in the past 70 years? Now it’s easy to find out.

It provides a captivating snapshot of the changing landscape of the city and the urban sprawl that has pushed the metropolitan boundary out further and further. 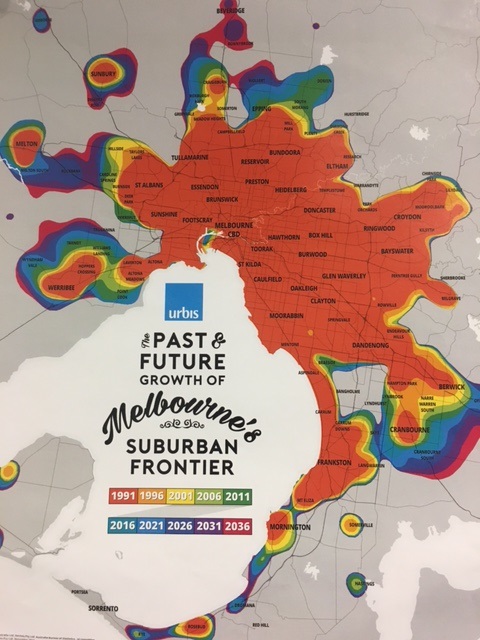 Nathaniel’s map has just been selected to appear in the 2017 GeoHipster calendar.

It shows Melbourne after two world wars and a depression, it was quite a small city then.

“The key for me for doing it was about finding a better way to present these maps and to relate to the landscape of 1945,” he said.

We’ve pulled out a few notable changes we’ve found in those 70 years but it’s highly recommended you go and check out the full sliding map at Nathaniel’s website.

Let’s start with the MCG in the map above. During WWII, the ground was actually requisitioned by the government for use by the military, including the US Army and Marines, and did not host football for five years.

The ‘G itself has since been transformed with multiple redevelopments, while the whole area has become a world-class sporting precinct. Notably, things have changed over the rail lines where Melbourne Park and AAMI Park now stand. 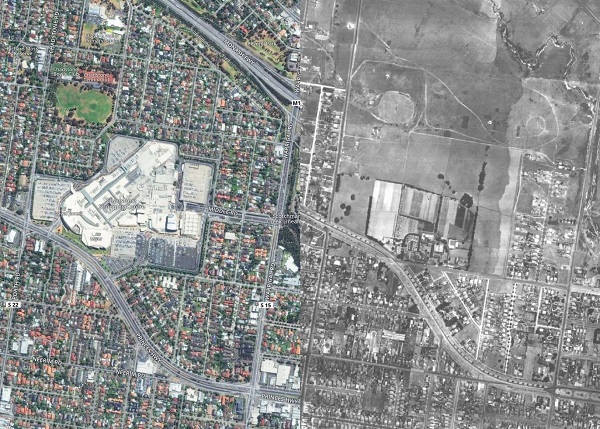 Now for another Melbourne icon constantly expanding and swallowing up the space around it: Chadstone Shopping Centre. Melbourne’s first shopping centre opened in 1960 after the land was bought from the Convent of the Good Shepherd, which is visible in the above map.

Chaddy took its name from a small farm which used to sit on the same land, where plums, apples, cherries and pears were grown.

Melbourne didn’t get its first international airport until five years after these maps were made and it was at Essendon, rather than Tullamarine.

Tulla opened in 1970, eventually taking on both international and domestic flights. But before than it was a bunch of fields which you can see above. Now tens of millions of passengers move through its terminals each year. 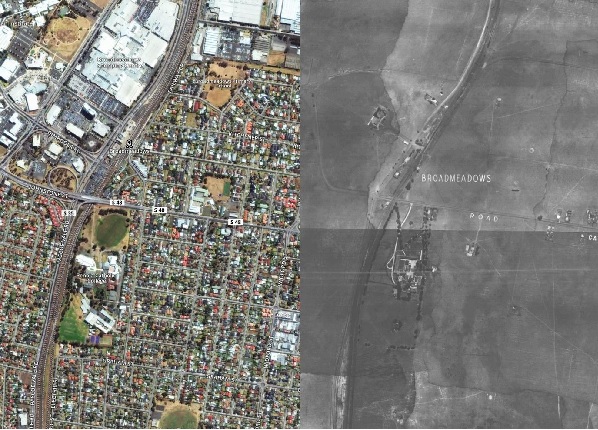 Probably the biggest change to Melbourne’s landscape are the new suburbs that have sprung up in the past 70 years on land that was once used for agriculture, like Broadmeadows above.

Suburbs that were probably considered a long way from Melbourne were transformed from the 1950s onwards to become major residential areas. These days, the northern suburbs is one of the fastest growing corridors in Melbourne.

Before the introduction of container shipping, Melbourne’s main trading hub was Victoria Dock close to Spencer Street Station. Not hard to see where all that stevedoring action went in this map.

Swanson Dock and Appleton Dock were built on Coode Island in the 1950s and 1960s, forming part of the current Port of Melbourne which handles 2.5 million containers a year worth around $85 billion in trade. 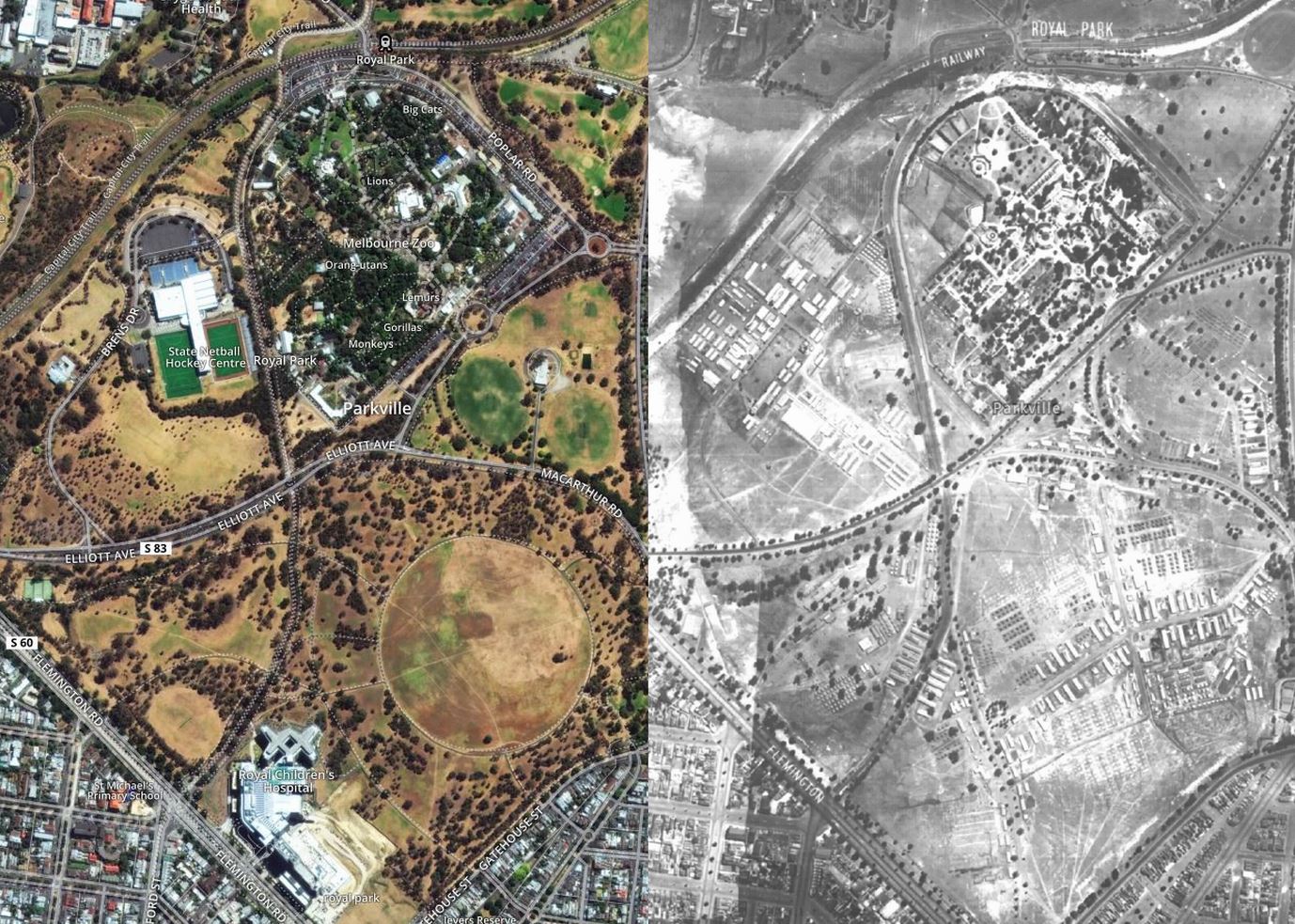 This map of Parkville shows a few changes, most notably the sheds and shacks of Camp Pell which used to sit next to the zoo. It was decommissioned in 1945 as a military camp but would become notorious as temporary public housing.

Many lived there in poverty and with the threat of disease. It was torn down before the Olympics in 1956. You can also see where the Royal Children’s Hospital was built in 1963 on Flemington Road.

‘X’ marks the spot on this map. In 1945, Fishermans Bend was home to an airfield and Commonwealth aircraft research factory.

The airstrip was removed in 1968 after the construction of the West Gate Bridge. Large swathes of Fishermans Bend have become industrial, however there are plans for it to end up being a new residential suburb. 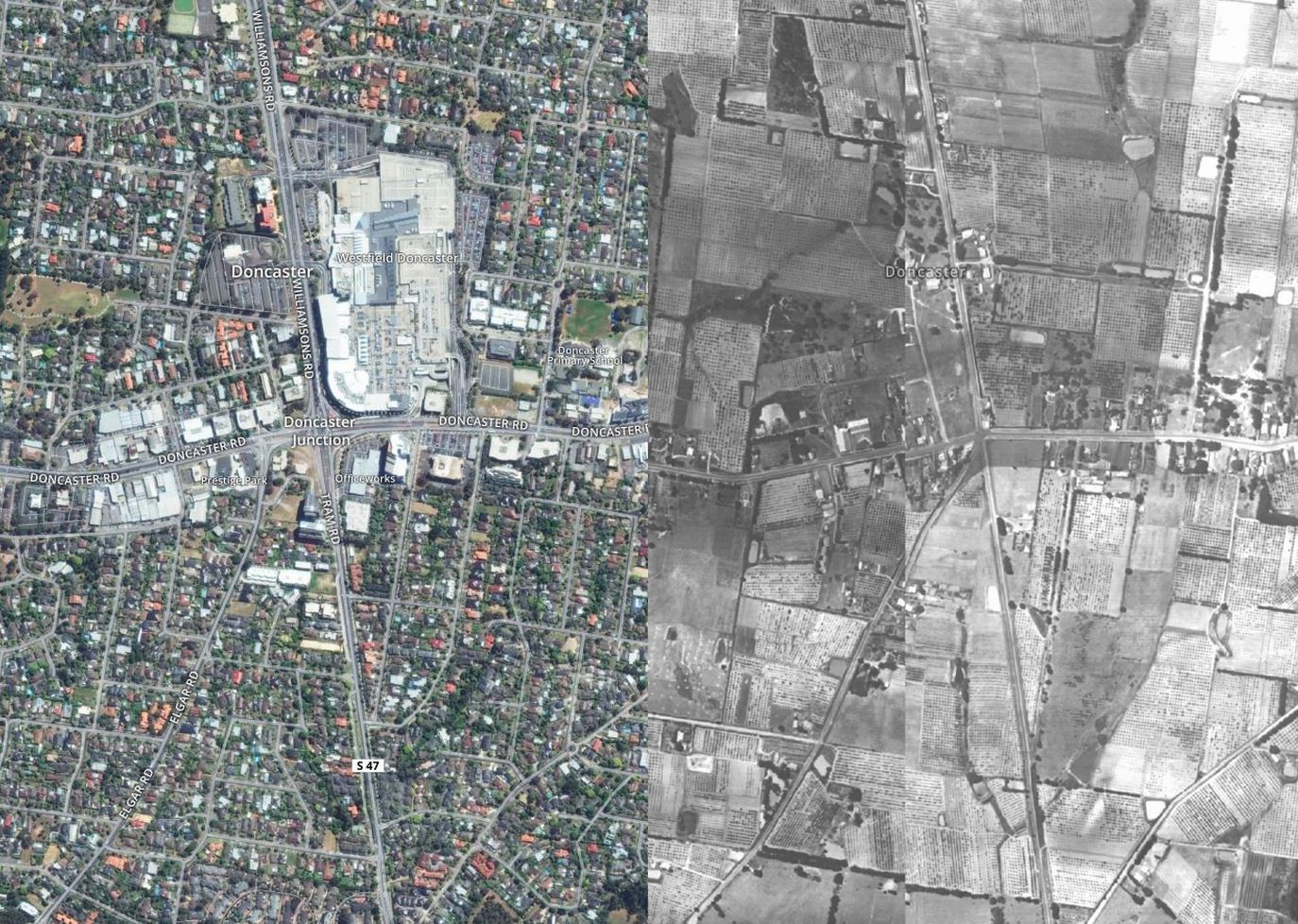 There used to be lots of open space east of Melbourne at Doncaster, Bulleen and Templestowe but not any more. This map is of the busy Doncaster Road junction.

Before the war, the area was known for its orchards. Subsequent development has transformed the eastern suburbs completely.

Still in the eastern suburbs for this map and here’s what the Yarra River used to look like before they built the Eastern Freeway in the 1970s.

The roads were probably a lot quieter then than they are now. And see all that room for a train line. Those golf courses look pretty new as well. 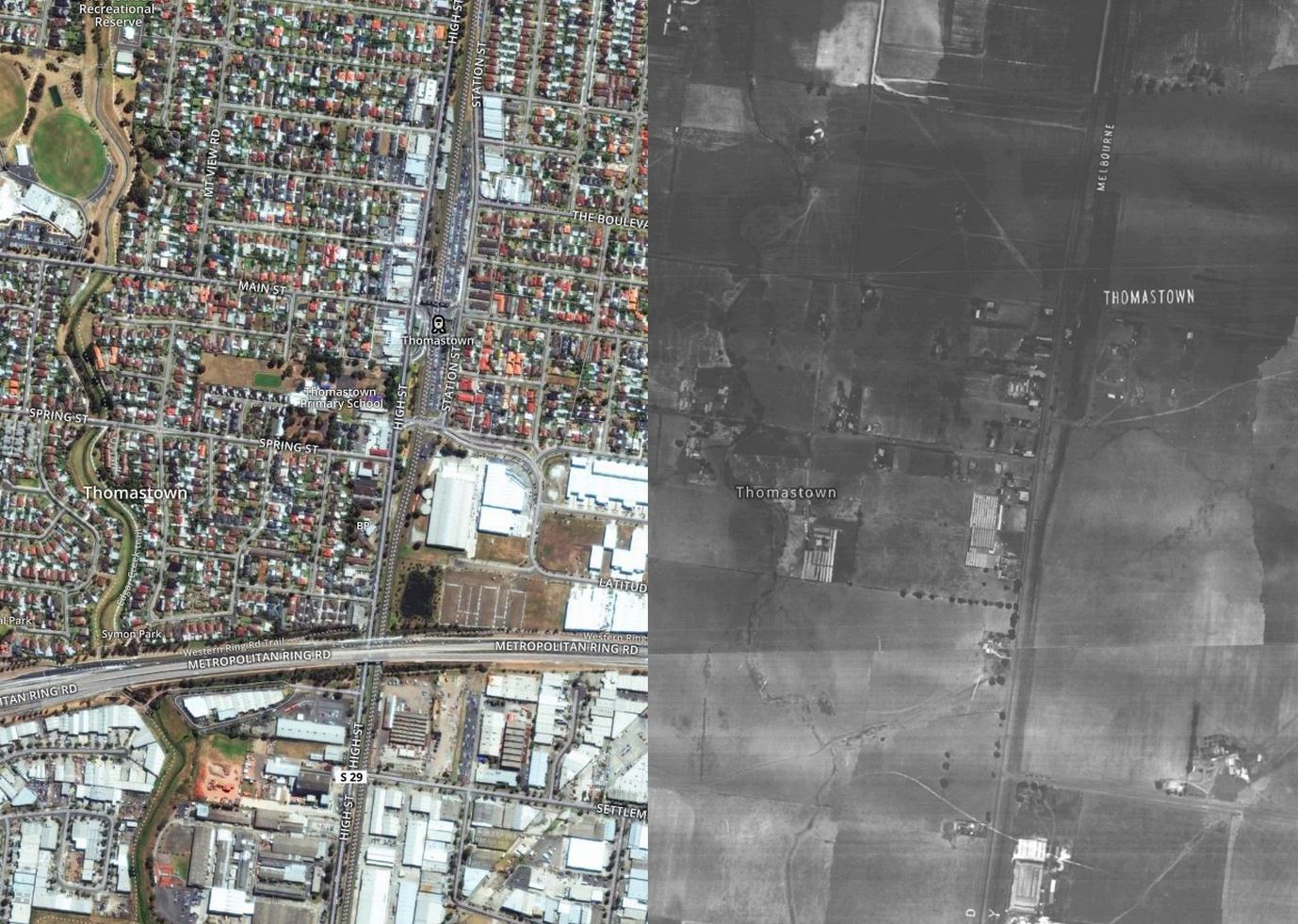 Once were paddocks. Here’s a map of another suburb that’s changed a bit since the ’40s. Thomastown, 17 kilometres from the city, looks like a country town in this shot.

“It’s a real snapshot in time just before that post-war boom that Melbourne underwent, when waves of immigrants from Europe and then Asia came through,” said Nathaniel Jeffrey.

In this map, Docklands is full of ships unloading cargo as Melbourne’s main port. But after the wharves moved to other areas of the river in the ’50s and ’60s, the area fell into disuse.

It was eventually redeveloped to become a completely new suburb, which included the construction of Etihad Stadium and loads of high-rise apartment blocks.

And a bit more

The comprehensive set of about 90 photographs were commissioned by the Department of Crown Lands and Survey and taken by Adastra Airways in the 1940s.

Using mapping software, it took Nathaniel about a year to layer the maps onto current-day aerial shots that stretch right across Melbourne. Some maps are missing, but Nathaniel isn’t sure what happened to them.

“It shows Melbourne after two world wars and a depression, it was quite a small city then,” he said.

For more information on our Geographic Information Systems capabilities, contact us.