All part of the master plan: Brisbane’s transformation

In his article prepared for The Brisbane Report: The Annual 2017, National Director James Tuma delves into the ideas, projects and big thinking that is transforming Brisbane into a new world city.

Brisbane is great at transforming precincts, at making something tangible, story-driven and human out of our spaces. Take the urban renewal of Newstead – few Australian cities have so successfully reinvented somewhere over such a short period.

Renewing, improving and shaping our cities is what gets me out of bed in the morning. Cities are fascinating – they are complex, nuanced engines. The coming together of different demographics, persuasions and ethnicities create a dynamic that is intrinsically compelling. Overlay this with the economics of market cycles, the complexities of regulation and everything else, and you have fertile ground for innovation.

The ultimate goal of city-shaping is to make great places for people.

The ultimate goal of city-shaping is to make great places for people. As Brisbane transforms into a new world city, the best city it can be on the global stage, what does it mean for those who matter most, the people?

Cities such as London – with its incredibly strong cultural drivers – and Toronto or Auckland – which both dominate on cultural, transport and infrastructure levels – all contain lessons and spaces that Brisbane can aspire to, and potentially surpass.

Here’s where I think Brisbane’s strengths can come to the fore.

The evolution of cities & the Brisbane 'mindset'

Cities have never had a greater role to play on the global stage. Investors and corporations internationally aren’t looking at countries, states or provinces – they want to invest in cities. Over the next couple of years, cities will see trillions of dollars of investment.

We still want our great leafy outdoor lifestyle, we still want to have parks and to walk the dog and go for a bike ride.

So, cities are becoming increasingly powerful in terms of their interrelationship with one another, and as fields for investment and innovation. The Grattan Institute did some research last year exploring how cities are becoming more and more magnetic.

It found that despite technology enabling us to work anywhere, anytime, we’re seeing an ever-greater coalescence of people, investment, capital, talents and ideas in cities. They are becoming more potent and significantly out-competing regions.

For Brisbane, in an important psychological change, we no longer look south of the border for comparison. The thinking behind New World City, our own economic development, our own industries and our own focus on various precincts’ innovation has meant that we’ve matured.

That’s a major change in 10 years, and an important one because it underpins something else about Brisbane – an increasing desire for urban life.

That plays out in some of our recent research here at Urbis. People are trading infringe and suburban lifestyles for the convenience and attractiveness of living near South Bank, or getting a coffee, or being able to eat out at any time of the day.

Or cultural experiences, something Brisbane is doing increasingly well. More than 30 per cent of the people now renting the new apartments built during the last cycle in inner Brisbane have actually come from within Brisbane, but past 10 kilometres out.

But we are now, to add to the complexity of how the city functions, prepared to accept higher density living as a trade-off for amenity, even for families.

When people think of Brisbane, they think of our established precincts: the Valley, the CBD, Toowong, West End and South Brisbane. However, there are other opportunities to capitalise on. Our universities, for example, are fertile ground for creating change, attracting investment and building energy in a city.

Cross River Rail and Brisbane Metro, which intersect at several points, will be truly transformative.

Similarly, hospitals are part of the next wave of how we might see the city defined. Knowledge economies based on innovation and research will drive spaces and thinking at Herston and at the Princess Alexandra Hospital, Mater Hospital and so on.

Most cities talk about knowledge economies, innovation, health and education. Brisbane’s unique advantage is its ability to co-locate and push together these higher learning institutions in a different way. Take the cervical cancer vaccine developed at the PA Hospital – that is world-leading research and implementation. We can get better at building economies around projects like this.

Then there are the more traditional economic drivers such as Australia TradeCoast, comprising the Port of Brisbane, and the second runway at Brisbane Airport. This is going to be a significant driver of trade, tourism and people movement that the city can capture.

The regeneration opportunity I’m most looking forward to though is the inter-connectivity story. Cross River Rail and Brisbane Metro, which intersect at several points, will be truly transformative. We’ve always been good at creating places – points in time – but we haven’t necessarily had the capital to connect those things to make a whole that’s greater than the sum of its parts.

Brisbane has traditionally been perceived as a series of individual offers that you might seek to engage with, rather than as a singular thing tied together with a great infrastructure network. But if you decide that you want to go to Auckland for a holiday, you don’t go to Auckland because of Ponsonby, you go to Auckland as an offer.

Connecting Brisbane’s offer is one of the great urban renewal opportunities for us.

Our future is where the river runs

The next 10 years on the river are especially exciting. Just take a look at what’s happening – start from the mooted cruise ship terminal at the mouth of the river, the Port expansion, the second airport runway, Hamilton North Shore is many hectares of renewal opportunity, the Kingsford Smith Drive upgrade, all the way through to changes at the Powerhouse and the great qualities of New Farm Park, the transformative work going into Howard Smith Wharves, City Reach, the game-changing Queen’s Wharf development, South Bank, the cultural precinct, obviously what’s happening at West End and then around to The University of Queensland.

The next 10 years on the river are especially exciting.

If you put all that together, it’s no doubt many, many billions of dollars of potential mooted, planned, or underway investment. It’s an incredible asset and Brisbane City Council’s work around the River’s Edge strategy is to be commended. We’ve relished working on it with them.

So what does this all mean for Brisbane? I think we’ll wake up in 10 years, potentially sooner, and not
even recognise ourselves. We will have captured so much opportunity around the river and we will have transformed our city.

But most importantly our people – their needs, wants, aspirations and lifestyles – will have driven the story of what Brisbane will become.

This article first appeared in The Brisbane Report: The Annual 2017.

As Brisbane and other Australian cities continue seeking strategies to improve their quality and competitiveness, the question is raised: are there any common threads that all cities can embrace at some level? We think so.

Our complete guide to driving global competitiveness through strategic thinking and design is available now.

Download your copy of ‘Shaping Australian Cities‘ by clicking the thumbnail below. 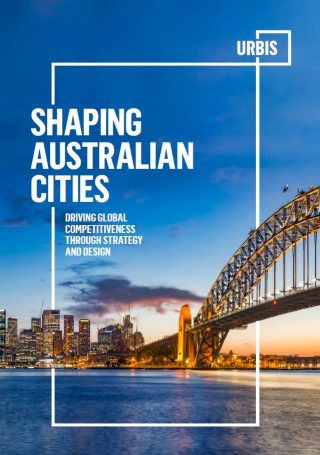 Have Australian cities come of age?