Project 90K sets out plan for the Perth City Deal

PROJECT 90K, is the Property Council’s call to action for a series of infrastructure, planning, governance and policy changes required to lay the foundations to ensure the ambitious 90,000 people in Perth’s CBD target becomes a reality by 2050.

In 2019, federal, state, and local levels of government agreed to a City Deal focusing on Perth CBD – by creating an energised city for people to work, live and play through higher population density and providing an economic uplift to the city.

Approximately 30,000 residents currently live in the City of Perth, which has a population density far behind other major capital cities.

Property Council WA commissioned Urbis to establish the infrastructure requirements of an entire generation of Perth city residents. To be successful, the Perth City Deal must put the attraction, servicing and retention needs of these future City-dwellers at its core.

Urbis revealed a population of 90,000 within the current City of Perth boundary by 2050 means: 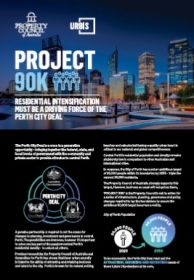 WHAT MUST BE DONE?

For Project 90K to be fully realised, all three levels of government together with industry, will need to explore a five-pronged framework to ensure Perth CBD’s vision can be turned into a reality – acknowledging the future of city services, brand, connectivity, focus and governance measures are implemented.

A clear and united vision for Perth City

Big (and Small) Ideas for Perth